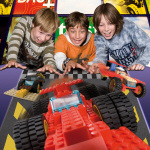 If you love Legoland, but live too far away to visit regularly or want to get a taster of what it is like, the Legoland Discovery Centre which opened in Easter 2010 at the Trafford Centre, Manchester is a great place for a day out.  Unlike its extensive site in Windsor, this northern version is indoors, so is open all year round. This was a much anticipated visit for two Legoland Fans aged 7 and 10 plus Mum (Legoland Fan No.3).

Once inside, a lift takes you upstairs for the 'factory tour' conducted by Professor Brick, where you can help him to make fresh Lego supplies.

After this you can skip on to the rest of the exhibit if you wish but most head straight to the Kingdom Quest, an exiting laser shooting ride rather like Laser Raiders at Legoland Windsor. This was great fun as Laser Raiders is a favourite with the family.

Next is Miniland, featuring Lego representations of some of the North West's most iconic buildings.  I felt a few labels next to some of the buildings would have been helpful for those of us who are not local; however the instantly recognisable Blackpool Tower model must have a special mention, as when the lights are dimmed it is lit up to give a flavour of the legendary Blackpool Illuminations.

The rest of the Discovery Centre consists of on huge room which includes a big indoor activity centre so that the kids can work off any extra energy, several Lego building areas for boys and girls and different ages, an area for testing Lego vehicles and a café. The site also includes an extensive Lego shop.

The day was a big success with both children, who definitely did not want to leave at the end of the day. Favourite moments? The Kingdom Quest ride got a universal thumbs up.

To find out more visit www.legolanddiscoverycentre.co.uk.

You can get discount entry tickets to the Legoland Discovery Centre Manchester at Buyagift.co.uk.

About the Author: Jacqui O'Brien is the editor of eParenting.


Out Now! - March's DVD, Blu-ray & Download Movie Releases For All The Family